Badminton Tactics for Singles and Doubles

Badminton tactics for singles and doubles are definitely different according to coverage court area which singles player has wider area to be covered.

Each has its own tactics to win the game but it’s also influenced by your stroke skill, movement skill and physical fitness when applying theme. For instance, if your smash is weak, then you have less options for effective shot or if you are unfit, then you will miss out on many attacking opportunities.

However, all tactics have same goal, i.e. make your opponent can’t do effective, powerful or accurate shot.

In my opinion, there are two big differences between singles and doubles, i.e. movement and stroke. You must have good footwork in singles because you don’t have partner to cover the court. Regarding with stroke, deceptive stroke will give more benefit in singles rather than in doubles, as you can see in a video below. Obviously, the completeness of stroke skill, good footwork and physical fitness is highly required in singles.

Following are few basic badminton tactics for singles:
1. Create situations where your opponent hard to reach the shuttlecock so that he can’t make effective shot or can’t return the shuttle, either. You can do this by placing shuttlecock away from your opponent (usually by playing shot to the corners) or playing deceptive stroke.
2. You have to be able to cover all parts of the court so that you can play effective shot in each part. In order to get this situation you must stand in a roughly central base position. The video below is short guidance of base position for singles

However, the base should be flexible depending on few factors, such as kind of shot you just played and strength / weakness of both players.

There are some other badminton tactics but I would like talk just one more tactic regarding with serving. For other tactics you can find them in other blogs or YouTube videos.

Commonly, singles players play high serve for few reasons :
1. You have plenty of time after serving to get ready for the next shot. You must not play low server if you are not able to react quickly after serving in order to cover both the front and the back of the court immediately.
2. Your opponent does not have many options in returning the shuttlecock. He most likely only plays drop shot/smash and clear / lob shot. On contrary, if you play low serve, your opponent likely has more better angle in returning the shuttlecock. He has options to play netting, cross netting, straight lob, cross lob or drive.
However, high serve may not appropriate if your opponent has powerful and accurate smash shot and deceptive shot. So you need to flexible, observing your opponent strength before starting the game.

As I stated above, doubles play is different from singles play. Doubles player must have speed, good reflects, and great power. Unlike singles, good footwork is not mandatory requirement. Following are sort of strokes you must excellent to become good doubles player : drive, smash, smash return, serving and wiping.

Definitely, doubles need team work. Hence, common perception between you and your partner is very important. When attacking, such as smash shot, you and your partner should play front-and-back positioning, which means one player in the rear court and the other one towards the front of the court. Look at the picture below. Don’t give your opponent a chance to attack

One of basic badminton tactics in doubles that is completely dominant: whosoever attack first will have bigger chance to win. It means, both you and your partner must be an aggressive attacking player and don’t give any chances to your opponent to attack. You can create such circumstance by striving to play smash shot, drop shot, net shot or drive. Just play clear shot or flick if you have no better options to return the shuttlecock.

When defending, you and your partner should play side-by-side positioning in order to cover the full width of the court. You have to ready in that form before your opponent starts attacking. The following pictures are instances how to reply the shuttlecock effectively. 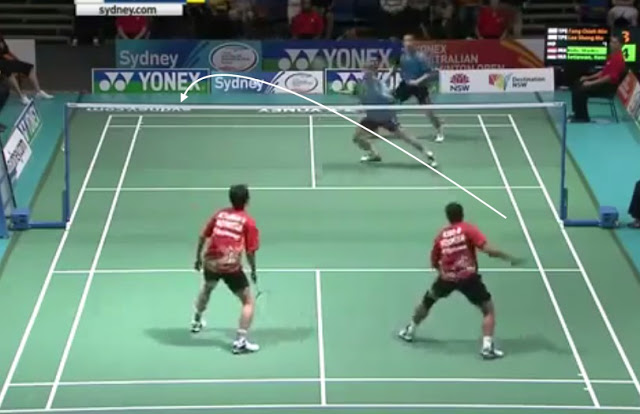